Just added to your cart

As its name signifies, the Maine Coon hails from Maine. There are a lot of myths surrounding the origin of this brown tabby coat breed, from the belief that it is the result of a cross between a cat and a raccoon — biologically impracticable — to the whimsical assumption that the Vikings carried them to North America with them, eras before Columbus voyaged the blue ocean to capricious notion that this cat breed descends from the longhaired French cats sent to Maine by Marie Antoinette in apprehension of her deliberate escape from France. Most likely these cats are the outcome of an astonishingly exquisite cross between short-haired domestic cats already the country and active longhaired cats carried home as mementos by New England seamen. Maine Coon Cats are a natural breed and very little is known of their origin. But one thing is certain - this breed of felines is not the result of a mating between a cat and a raccoon. Wherever they originated from, these cats were observed as household and farm workers, profoundly admired for their mousing abilities and talent.

The earliest reported mention of a Maine Coon came in 1861 and was about a black and white kitty named Captain Jenks of the Horse Marines. It wasn’t surprising to see the home-bred Maine Coon felines at popular cat exhibits and shows held in Boston and New York after that. A female brown tabby Maine Coon was titled The Best Cat at a cat show held in Madison Square Garden in 1895. It kept bagging the Boston cat show awards until 1900 when it was overthrown by its son-kitty. When the Cat Fanciers Association was established in 1908,  Molly Bond a Maine Coon was the fifth cat that registered with it.

For quite some time, Persian cats and exotic Siamese took its place almost around the shift of the century and voiced the end of the Maine Coon's fame for nearly around five decades but it has gained its popularity again in recent years when things took a turn for the better in the 1960s. These majestic cats are considered the only long hair cat breed native to the United States of America and are among the world's most popular pedigree breeds today. They stand third among the breeds listed by the Cat Fanciers Association. 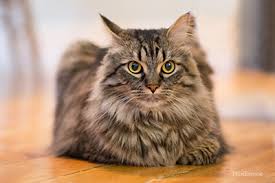 The Maine Coon is a heavily boned, muscular cat with a broad chest. The most striking characteristic of the Maine Coon cats is their one-of-a-kind ears which have adorable tufts on the edges. This provides Maine Coons a lovable look. They have a slight dip under their eyes and possess thick strong legs. These cats have large paws with tufts on the edge. These paws are best-fitted to help them tread on the snow easily. One of the most captivating features of the Maine Coon is its long, strong and fuzzy tail which sets it aside from all the other breeds of the cats. The tail provides warmth to the Coon kitty when it envelops the body. The tail of a Maine Coon Cat is its source of pride and it knows it well. When a Coon cat-walks past you, it is a sight that will certainly grab your attention! These cats are reckoned as the "social queens" because of their always-embracing expressions and large alluring eyes which would draw you towards them. The shade of their eyes varies from green, blue, gold or copper and the nose of these cats is always upright.

Male Coon cats are larger in size than their female counterparts. The size of a typical Coon can lie anywhere between 4-5.5kg in females and 5.5-8kg in males with a life expectancy of twelve (12) to fifteen (15) years. The biggest Maine Coons have estimated to be around 11.5kg You may have heard of a 13+kg Coon cat, but a Maine Coon that stretches out to that size is reasonably overweight. These cats though big in size, have a slow-growing process. They will reach their maximum size in a minimum of three (3) years period.

Long-haired, fluffy and sumptuous; their coats keep them cozy and warm. Their coat drapes longer on the body and behind the legs but is shorter over the shoulders. Their thick, shaggy and lustrous coat gives them a sturdy appearance. Just like their eyes, the colours of the fur ranges from classic brown tabby to white to black and all the shades in between. Some of the cats have patches or stripes making all of them appear distinct from one another. The expressions of a Maine Coon Cat varies from a beastly wild look to a warm adorable one. However, even with wild feral looks; they never stop being friendly and lovable. 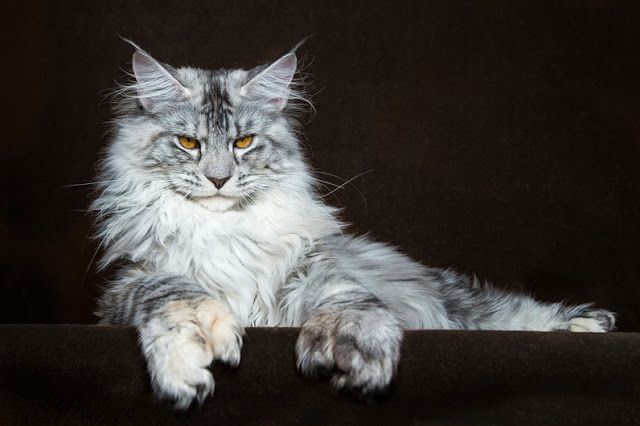 Maine Coon, initially, was an outdoor feline, later owing to their mousing capabilities became a working cat breed who kept farms, barns and homes clear of rodents. These cats are quite active and perform in functions, and cat shows and is one of the favourite cats of the cat aficionados. 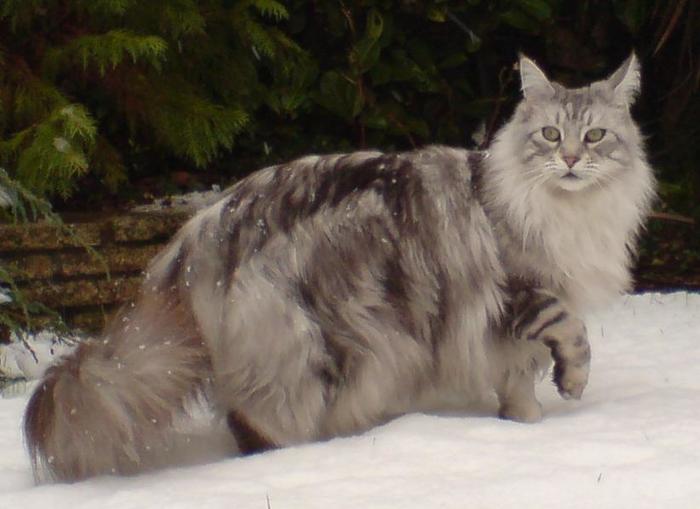 A Maine Coon cat is quite sociable and amiable and loves its family. It will follow you around all the time and show an interest in what you are busy. Although it loves being the centre of attention and likes to make new friends, a Maine Coon is not needy and will never bother you by urging you to play with it. Your pet Maine Coon will silently follow you around supervising what you are doing. If you do not let them in, they will sit in the doorway patiently waiting for you to right your wrong and let them in. They're not usually a lap cat, but they do like to be seated near you.

The Maine Coon has a delightful personality. It is always dynamic and active and will always keep bouncing around making you laugh, and habitually enjoy a kittenish love of play well into adulthood. Male Maine Coon Cats are especially prone to childish behaviour. Female cats are more refined, but they aren't above a play of hunt either. Maine Coons have great mousing skills and no rodents will remain safe in your house in the presence of your Coon pet kitty. They know how to keep themselves busy and keep their skills sharpened by pursuing toys and grasping them with their huge paws.  They always enjoy a good game of fetch and will bring small toys, or balls back to you. They are not that much of a climber and prefer to stay on the ground. Known for its intelligence, a Maine Coon will willingly learn new tricks or play with cat toys that stimulate its mind. A Maine Coon can sense a threat and will always act as guards to protect its master from any danger. Young Maine Coons are more active and vigorous than the older ones.

Maine Coons have great people skills. Cats of this breed will be wonderful with your children and other pets which includes dogs. They like to make new friends and always fancy playing around with their toys. if you have a busy schedule and are not around for much, keep it busy with toys that stimulate its mind as Maine Coons love taking on challenges and provide a water bowl he can dabble in. Your Maine Coon pet will enjoy watching birds from a window, so set up a bird feeder just outside one of the windows. The willingness to learn to walk on a leash may prove them great pets for people who travel a lot and may want to bring their feline friend along.

Not very vocal, Maine Coon cats usually use body language to communicate. If your Maine Coon gives you a nice gentle head butt, it would mean you are special to it. If your Maine Coon cat wants to make any requests, you will hear a soft chirp, cheep or a trill. These cats are highly adaptable and can easily get accustomed to any lifestyle. Therefore, if you have a busy lifestyle, they will prove the gem of a pet.

Care and Grooming of Maine Coons 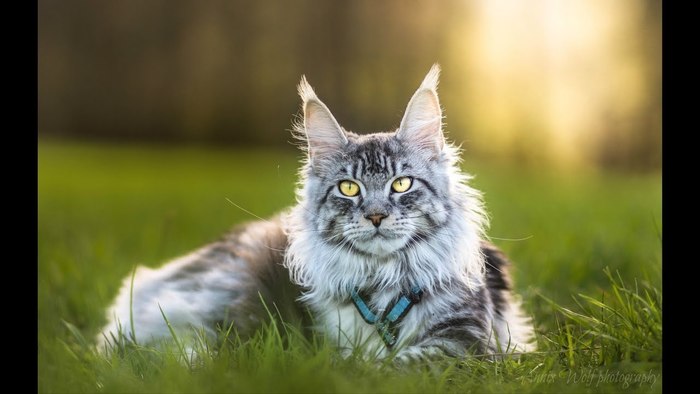 The Maine Coon cats have a thick, furry coat that’s smooth and velvety to touch. It rarely sheds and mats. A weekly grooming session is enough to care for it. Comb the fur, it removes the dead hairballs. Use specific grooming tools to detangle the fur and a grooming rake to pull and collect out the inert undercoat. Be gentle when using the rake specifically around the stomach and the tail. Bathe your Coon friend as required i.e., when its coat looks greasy, it is recommended to bath it every few weeks. Clean around its tail with baby wipes to clean any poop-bits stuck to the fur. Trim your feline's claws every two (2) weeks. Brush the teeth as the cats can be prone to dental diseases.  Image Source: Google Images

Schedule regular veterinarian visits and keep your pet cat vaccinated. Use a soft, damp cloth to wipe away the corners of the eyes to remove any discharge. Clean the ears every week. Wipe the ears with a moistened cotton ball. Cats are meticulously clean and they would not use a dirty or a soiled litter box. Maine Coon cats are very particular about their hygiene too, and a clean spot-free litter box will also help keep their coat clean. Cat parents with busy schedules and hectic work shifts can consider getting an Automatic Cat Litter Robot to ensure their Maine Coon is catered to in the manner that best suits this large and regal cat breed. It will help ease the litter tray workload off you by automatically cleaning the litter box after your cat. If your budget permits, an automatic litter box may be a great option for keeping your cat’s litter box spotlessly clean and fresh.

As much as Maine Coons are admired for their charm, they’re praised and loved for their affable personality attributes and witty intelligence. They adapt well to all kinds of lifestyles easily and are quite independent in going about their businesses. These cats have a welcoming nature and can effortlessly bring attention to themselves by their appearance and their activities. Hence, it is safe to that the snuggly Maine Coon proves to be a kind, gentle and an affectionate pet.